The school’s topic theme this year is Scotland, so photographic principles of texture, colour, perspective, focal points and framing were taught along with local points of interest. Local history was touched on with the pupils learning in class about the Dixon family who built the area, and renowned landscape architect, Sir Joseph Paxton, who designed Queens Park.   Alongside bird and plant species found in the park in late winter and early spring, we also visited and found out about local monuments and landmarks. These included the Iron Age mound which surrounds an ancient settlement in the park, and the Battlefield Monument which commemorates the Battle of Langside where Mary Queen of Scots was defeated in 1568.

The classes involved walking tours that allowed the pupils to explore the places and facts they had learned about in class.  They were able to visit a range of local locations within their community whilst exploring the medium of photography, and to record their learning and experiences through their photos each week.

Come along and see some great examples of local photography by our young participants. 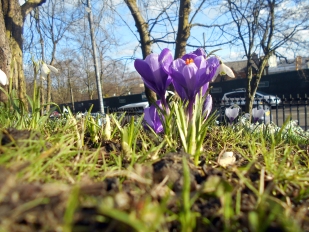 THE EXHIBITION OPENS ON WEDNESDAY 28TH OF MARCH AND RUNS UNTIL 12TH OF APRIL AND CAN BE VIEWED BY THE PUBLIC DURING THIS TIME.