Govanhill Voice spoke to Ken MacGregor who runs the Dance Factory on Calder Street with his wife Lesley about their experience in working with guide dogs..

Firstly can you tell us a little about yourself and your business in Govanhill?
My wife, Lesley, and I first met when I was directing a film for the BBC about her and one thing led to another. In 1984 we opened the doors to the Dance Factory in Calder Street and have been there ever since gradually expanding the premises and building up a reputation for quality dance education. We rent out studios to passing celebrities like Nicole Sherzinger, Toyah Wilcox, Strictly Come Dancing and so on.

I was working with a kids dance group in Dance Factory when I first got talking to you about guide dogs. What got you into training assistance dogs?

When our daughter was 14 she said, ‘Can we get a puppy?’ and me, with heart of stone, said, ‘No, you’ll be off to college sometime and we’ll be stuck with a fully grown dog’. I knew someone who had puppy walked Guide Dogs and suggested this was something we might do as volunteers.

Is it assistance dogs for the blind and deaf you help train?

No, just Guide Dogs for the Blind which is a fantastic life changing charity. We train puppies from six weeks to fourteen months. Currently we are on puppy number six, a twenty week old black Labrador called Quinn.
Many people think all guide dogs are yellow Labradors but actually most are Labrador/Golden Retriever crosses along with German Shepherd Dogs with the occasional Poodle, Italian Spinoni, Labradoodle and Collie thrown in. Some of the nicest are German Shepherd/Golden Retriever crosses. So its pretty much 50% yellow and 50% black and 50% male and 50% female.
We concentrate on socialising the dogs by taking them into restaurants, pubs, shops, buses, trains, theatres and so on, basically anywhere a Guide Dog Owner might want to go. We have very particular ways of negotiating obstacles like stairs , doorways and crossing roads. We want the dogs to be calm and not distracted by other dogs or people. Please never distract a guide dog, you could be putting someone’s life in danger.
The training manual is as thick as an old fashioned telephone directory and because the dogs will pass through quite a few hands we all have to be doing things in exactly the same way. We don’t allow the dogs sticks or balls because we don’t want to encourage a chasing instinct and we have to instil in them perfect recall; you can imagine how important it is for a visually impaired person that their free-running dog returns. We also train them to ‘find the buttons’ on lifts, pedestrian crossings and ATMs. They are supposed to just lead you to the ATM but one dog we had, Woody, leapt up one day with his paws on the key pad which led an astonished woman to remark ‘that’s amazing but how does he know which buttons to press’? Well, they are good but maybe not just that good!
Quite often you see people becoming a little uncomfortable when you bring a dog into a restaurant but usually within five minutes they are telling you they can’t believe how well trained your dog is.
Once they are fully grown you are quite often mistaken for being visually impaired yourself and I’ve been led across roads by well-meaning people despite my protestations.
This all sounds pretty tough and demanding on our dogs but believe me once they are at home off the lead or out of harness they are very, very much loved family pets.
These dogs are bred as working animals and thrive on challenges, have the best of food and veterinary care and aren’t left at home while their owners go to work, they are together pretty much 24/7. The cost of breeding and training a Guide Dog puppy is around £28,000 and that rises to somewhere around £55,000 during its working life. They retire to become pets so an owner might have five dogs in their lifetime; that’s a lot of money that all has to be found through charitable donations.
When the dogs leave the puppy walker they spend almost another year in training at one of the guide dog training centres and for most dogs in Scotland that means the fantastic facility in Forfar. Once the dog has reached a suitable stage you are invited to Forfar to see them working in harness which is always a thrill and when a guide dog owner phones you to say that he or she now has a puppy you trained you realise why you are doing it, to change a life. 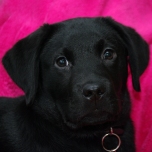 Above; Some of Ken’s dogs Woody, Klint and Hudson

It must be hard letting them go, either on to the next stage or to a service user. What kind of working life can the dogs expect and when do they usually retire?

We look on our temporary ownership as a sort of job and know we will give them up but it’s still a wrench to let them go. I know some people who have puppy walked once and are too upset to do it again. Lesley always refers to the person who collects the dog as ‘the child catcher’! The dogs don’t miss us, of course, dogs don’t dwell on the past or worry about the future. Lucky them.
The dogs start working around two years of age and retire around ten, Sometimes the guide dog owner will keep them as a pet alongside a new working guide dog or they will be re-homed as a pet and there is a long waiting list of people willing to take them.
Not all puppies make the grade as Guide Dogs because the standard has to be so high, for example, you need a really solid dog to make a judgment as to whether or not it is safe to cross a road. Those that don’t make it will be offered to one of the other assistance dog charities, then the police or army. If that wasn’t suitable then they would be offered back to the puppy walker or offered for re-homing as a pet. Our last puppy, Kes, is now a civil servant working in the prison service sniffing out mobile phones and drugs.

If you would like to make a donation for guide dogs please visit their page;

If you would like your community group, activity or business to have a feature article please get in touch with Lisa at lisacraigphoto@googlemail.com
tel; 07903152283.
For those interested I also have an independent blog if you wish to check it out;
https://lisahelencraig.wordpress.com/
and my photo website;
http://www.lisahelencraig.co.uk/