“I wanted out of the London rat race, and I thought ‘Where the hell do I go?’, and somehow, I ended up in Scotland.” ALAN TANNER

“When the train finally pulled in to Aviemore station I was told I’d have to get off there because it didn’t go any further. So I got out and started walking. It was snowing heavily and I was absolutely freezing, so after a while I decided to leave my luggage behind, because I just couldn’t carry it any more.

“I trudged through the snow for probably another thirty miles or so and ended up not very far from Dufftown, which is on the border of Moray and Banff. It was in this area that I later met the woman who was to become my wife, and eventually she and I moved in to a tiny two-room cottage in a remote little place called Auchindoun. It was a magical place, right by a river. You could hear the river babbling away every night and it would lull you to sleep, it really would.

“The cottage was in a bit of a state when we bought it, so I launched myself into renovating it: building extra rooms at the back, and rewiring the whole place. I had to put drainage pipes in to stop rainwater running off the hill and flooding the back garden. I also installed stained-glass windows outside the front door. If you look closely at the photo above you’ll see they’re still there today!

“Later we had kids, and for several years we brought them up in this little cottage. I was working hard to make a living as a freelance artist, taking on all sorts of jobs like designing logos for local businesses, painting murals in people’s homes, basically anything ‘arty’ that would bring in money. Meanwhile, living close to nature was having a powerful effect on my art, as you can see from this etching I did of my eldest son! 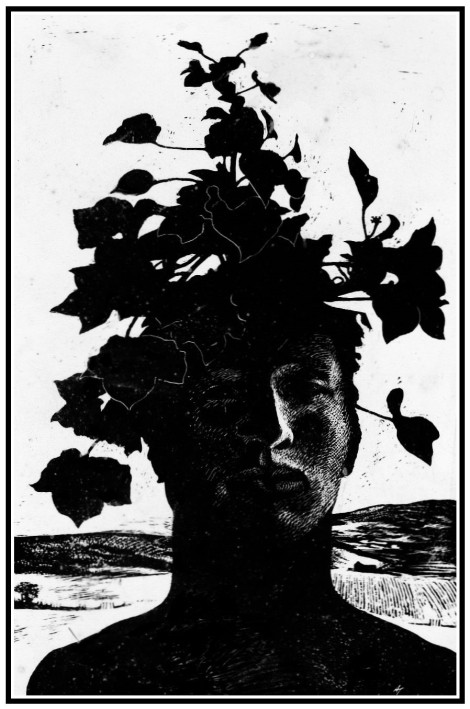 “Also, around this time, I did a large oil painting of ‘Ben Rinnes’, a towering mountain about five miles southwest of Dufftown…

“You can just make out Ben Rinnes through the clouds in the background, but the slender trees in the foreground, the meandering river, the standing stones; they were all conjured up from my imagination. They increase the visual appeal of the landscape, and for many years this oil painting has hung above the Glasgow mantlepiece of my former lawyer, who is still a close friend.

“You’re not trapped in a bubble. You’re floating on top of a bubble!” ALAN TANNER

“I once had this depressed friend who said he felt ‘trapped in a bubble’, so I tried to cheer him up by saying: ‘No, you’re floating on top of a bubble.’ He didn’t appreciate the joke, but for years afterwards I turned out drawings featuring a man who travels the world perched on top of a large floating bubble.

“Many of these ‘bubble man’ drawings are in my book Bubble Trip, along with a lot of my other comic book art drawn over the last thirty years. Very little of what I’ve drawn was done on commission, or even with the idea of selling the drawings afterwards. I did them just for the fun of it.

“Nearly all of my drawings start off as a ‘crazy’ idea, and a lot of them end up as an even crazier idea! As soon as I see an image in my head I have to put it down on paper, just to see if it ‘works’ or not. This has always been my way of expressing myself. Here are just a few pieces from Bubble Trip… 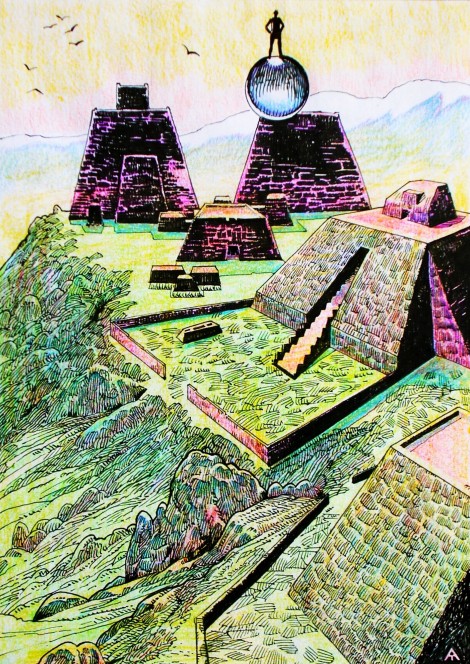 One of Alan Tanner’s many ‘bubble man’ drawings

TOCA, a cosmic private eye who hunts down stolen antiquities

Back cover of ‘Bubble Trip’

“Sometimes I ask myself odd questions, like: do dragonflies dream?” ALAN TANNER

“One of the many surrealistic ideas presented in Bubble Trip is ‘Do Dragonflies Dream?’ I got this idea from a fantastic daydream I once had sitting outside the former Go Slow (now Milk) café in Victoria Road. I do sometimes ask myself odd questions, and ‘Do Dragonflies Dream?’ became the title of an exhibition of my drawings of dragonflies held later in the same café…

A panel from Alan Tanner’s storyboard ‘Do Dragonflies Dream?’

To see the ‘Do Dragonflies Dream?’ Gallery click here:

“So, if you see me sitting outside the Milk café with a faraway look on my face, this is the sort of thing that’s running through my head. You’ve been warned!”

ALAN TANNER was born in London on 22nd March 1937. He grew up in Birchington-on-Sea, a small seaside resort on Kent’s northeast coast, and attended Thanet School of Art (Margate) and Canterbury College of Art, before serving in the British parachute regiment fighting EOKA guerrillas in Cyprus. In the early seventies his surreal, dream-like imagery featured on a number of album covers for bands in London’s flourishing underground rock scene, including Procol Harum, The Groundhogs, Hawkwind, and many other legends of British counterculture. He spent a decade in London as a graphic artist, first working for the notorious OZ magazine and then the entertainment guide Time Out. After bailing out of ‘the London rat race’ he found himself stumbling through snowdrifts in the Scottish Highlands, only to come across a remote cottage where he began a whole new life—as a freelance artist, and a family man.

IN PART THREE: ALAN TANNER’S TARTAN PANTALOONS
“I was amazed to hear of a famous Scottish sculptor called Greenshields, because that was my mother’s maiden name.” ALAN TANNER