A group of five students from Botswana University spent 10 days in Glasgow through an exchange program. Good Community Relations and Roma Youth Project, from WSREC supported them to show them what young people do in the city. 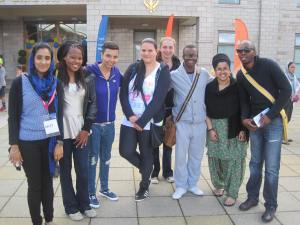 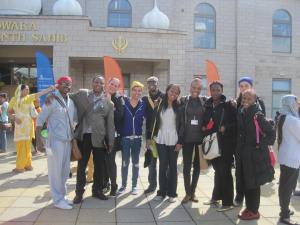 At 12 am, Govanhill Park was the meeting point and time for the tour for the Botswana students of the most diverse place in Glasgow: Govanhill, but why Govanhill? “We host them in Govanhill because it is multicultural and Roma Youth Project work with young people” explained Eva Kourova, Project Co-ordinator of Roma Youth Project. During the day of 6th of August, the group of students got to know the local reality and community initiatives in Govanhill.

The group of students were formed by Palana (23, Economic and Political Science), Gorata (20, Finance), Tumelo (26, Political Science), Bophelo ( 19, International Business) and Sally. They were accompanied by Dr. Lucky, Director of Careers and Capacity of Botswana University. To assist in their tour of Govanhill was present, Johannes Gonani, Project Support Assistant from Good Relations Project, who co-ordinate the whole exchange and visit of the group in the city.

Also joining them was Eva Kourova, Lenka and Michaela, from Roma Youth Project. The Roma Youth Project was engaged in “put together local youth and this group to make them learn from each other and discuss global citizenship and what it means to them.” explained Eva. David from Govanhill Housing Association was the guide of the tour; showing them local reality of this neighborhood, from housing problems, cultural diversity, project initiatives and community work. 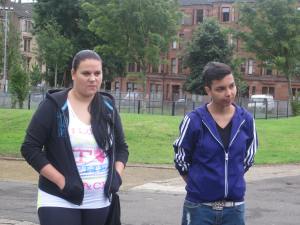 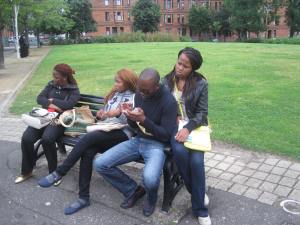 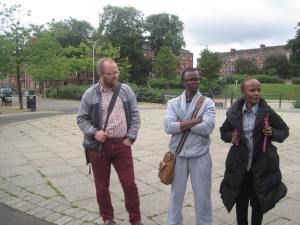 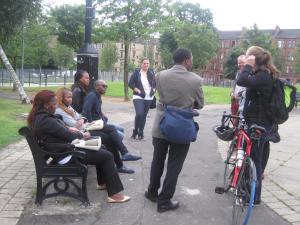 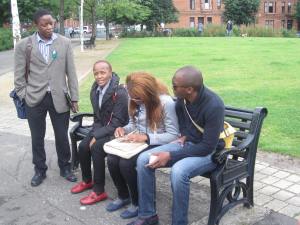 One of the important things that the students shared was about the Botswana situation is the country´s engagement in to fight against HIV/AIDS. Botswana faces one of the highest known rates of HIV/AIDS (advocatesforyouth, see below for link). However the indicators are encouraging and they explained that they are satisfied about the government’s action against this epidemic disease. “I am very proud because related with to HIV my country have done a lot and youth are in the center of this HIV/AIDS fight” commented Dr Lucky.
But the most interesting thing that the Botswana group explained of their country’s reality was that the largest proportion of the country is formed by young people. Young people age from 10 to 24 comprise 700,000, or 38.9 percent of the 1.8 million people living in Botswana. These young people are the largest group ever to be entering adulthood in Botswana’s history. One of the causes of the increased young population is the devastation caused by HIV and AIDS.
They explained that the youth are fully involved in the country’s change. “Involving young people in police and legislation issues are important. We can´t formulate issues about young people when they are not involved. Once you put young people fully involved you are likely to make the right choices, right decisions and policies to them.” told Dr Lucky.
“It´s important because it is the largest proportion of the population and a lot of the policies are trying to bridge the gap. The government is committed to provide good health service for the young people. We face challenges related with unemployment and the younger generation must establish themselves, so the government encourages us to find solutions.” told Tumelo.
This is a lesson that Botswana has to delivery to other countries, as observed by Eva “This conscious decision consequently provided youth with lots of opportunities but also responsibilities. This to me is ideal of how Scotland could develop their own youth led initiatives and learn how important it is to invest in young people, which in my opinion is currently severely under spent in Glasgow anyway…” 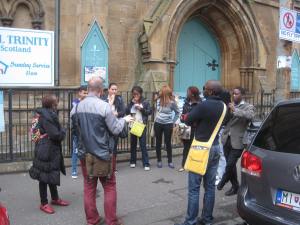 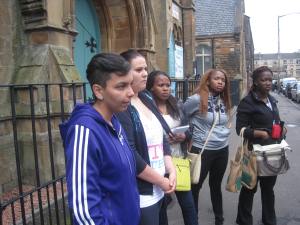 Walking through the Govanhill´s streets everybody shared impressions and observations about the area. Around 1pm everyone had a lunch, provided by Fusion Bites, a new local social enterprise, supported by Govanhill Housing Association, in Govanhill Baths and stopped to have a relaxing break. After that at 2pm Scott, from Govanhill Baths guided the group to a tour inside the Baths, telling us the history and the exciting cultural program that the space has hosted. 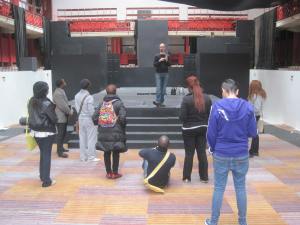 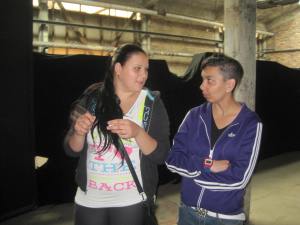 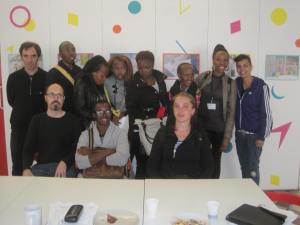 The highest point of the journey was the visited at the Sikh Temple, Glasgow Gurdwara. The tour at the temple, with all attention of the guides, the cultural experience of being in a place where everybody host you with a smile and are willing to share their culture performed an impact in everyone that was there. 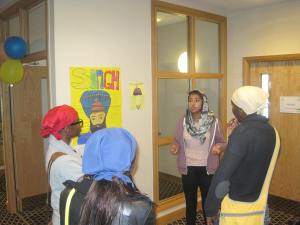 Cultural exchange are always a good way to get to know the world and being more open. “The importance of this trip was to: provide opportunities for young people to become and develop as an active and informed global citizens.” told Johannes.

At the end of the day, the feeling of being part of a very cultural diverse world made everybody happy.

“The most important thing that I have done here was the cultural exchange. See people’s lifestyle, culture, the way of doing things.” Tumelo

“Today I have learned that there are many things that need to be done related with community involvement, places and buildings that were not used. Also try to get community that are less of advantage and try to get them involved in what is happening in the rest of the society and the city where they are living.” Palana

“I will share this experience and I have learned to appreciate what my country has more by being here. I have also learned that there is many different things out there in the world to see. We appreciate that we have in Botswana but also understand now that there are something’s outside of Botswana” Bophelo

“I think the day went great. Everything about it was fun, I mostly enjoyed getting to know those guys and It was really exciting” Michaela

“I think they are very friendly people and we had some fun with them, the day went really good with them” Lenka

Johannes Gonani, Project Support Assistant of Good Community Relations Project, explains all the exchange itinerary of the group in Glasgow

“As a group we co-presented an African program with Awaz FM, where they also had a chance to market Botswana as an investment destination. We visited Glasgow Green to have a feel of the Commonwealth Games as well, as well as we explored the fringe of diverse cultural activities on show. They were also invited to Ben’s GCRP links youth summer project, which looks at issues like hate, crime, and uses activities like cycling to promote community integration with young people. Another place they visited was Waverley Care African health project, for a workshop on Youth and HIV strategy. They proved beyond all reasonable doubt the effectiveness of the Botswana HIV and AIDS strategy especially in empowering young people to lead the fight.

They took part in a Model Commonwealth Heads of Government session where young people took turns to lead sessions in discussions, about global citizenship, youth voice, identity (what it means to be a Motswana), youth empowerment and leadership. We visited St Mungo’s museum to explore how history helps shape identity and the interconnectedness of how humanity is shaped by belief and culture. At the end they were presented with certificates of participation at Glasgow city chambers by the Executive director of WSREC and also were given a tour of the city chambers. Finally, they ended the tour by taking part in a Scottish Afro Caribbean Carnival in Barshaw Park Paisley”.